Ong Fujian Chinese Physician Hall was founded in 1986 at Joo Chiat Road by Prof. Wong Pang Ong. Since then, we are honoured to have provided our medical expertise to more than half a million people. Ong Fujian Chinese Physician Hall initially started off as a single Traditional Chinese Medicine (TCM) physician clinic and has since expanded to our current team of three TCM physicians and one integrated Western and Chinese medical doctor. Through decades of practice, we have encountered a wide range of medical conditions and specialise, in particular, orthopaedics, neurological and dermatological diseases. Through our continuous effort, we are glad to be recognised by and voted as the top 12 TCM clinics in Singapore and hope to continue providing excellent medical help to those in need.

Enhancing health by providing patients with best medical practice through a combination of Western and Chinese Medicine. 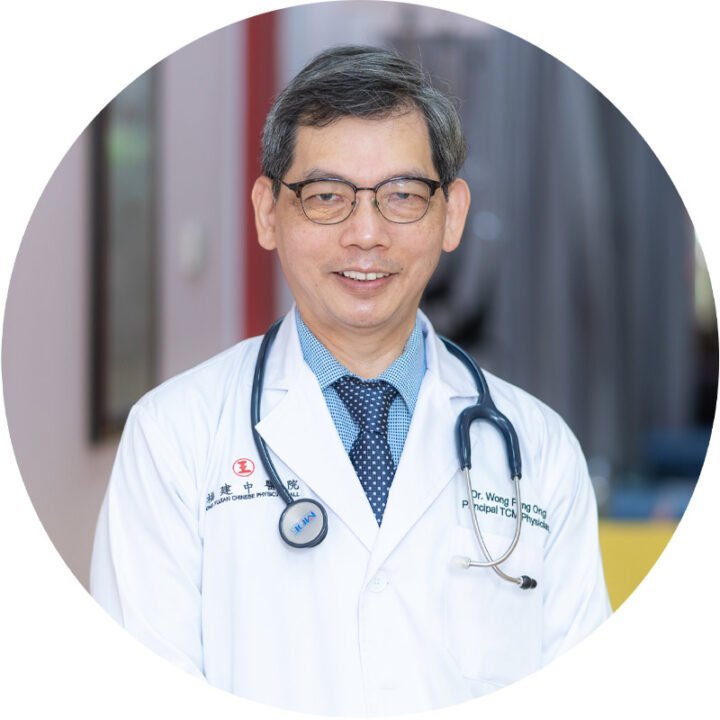 In 1986, Dr. Wong graduated from Singapore Chinese Medical Studies College with a diploma in Traditional Chinese Medicine (TCM). In 1996, he furthered his studies in Chang Chun College of TCM, where he was under tutorship of two of the top 500 renowned professors in China, Prof. Liu Bai Ling and Prof. Song Yi Tong for a Master Degree in Orthopaedics and Traumatology. During the course of study, he gained further knowledge on the prescription of herbs for bone injuries and other related illnesses. He also mastered the skill of ear and head acupuncture, and received his Masters Degree in 1999. In 2002, he enrolled into Beijing University of TCM for his PhD course on TCM Formula-logy and was under the supervision of Prof. Xie Ming, who is the head of TCM Formula-logy faculty in the University. In 2005, Dr. Wong attained his PhD by exploring the traditional and advanced usage of prescription in the modern world, with the research programme investigating its traditional Chinese medical theory and experience for the Yu Nu Jian formula used as prescription for osteoarthritis of the knee.

Mondays to Friday: 9am to 5pm

Dr. Lim studied in Xiamen College of TCM from 1992 to 1997 and graduated with a Bachelor Degree in TCM. From 2000 to 2001, she attended a professional course on ear and head acupuncture conducted by Hua Tuo College of TCM. In 2002, she enrolled in An Hui College of TCM for her Masters Degree in Acupuncture, Massage & Maneuver, under the supervision of Prof. Shen Xiao Ming, Vice Principal in Acupuncture, Orthopaedics & Traumatology faculty in the College. In 2004, she completed her Master’s dissertation regarding “Clinical study on the treatment of the cervical spondylosis of different neck type and nerve root type with the combination therapy of acupuncture at jingjiaji acupoints and Wong’s manipulation”. In 2005, she enrolled into Tian Jin College of TCM, under Prof. Shi Xue Min, a world renowned Acupuncturist who is also known as the “Father of Acupuncture” due to his creation of the Stroke acupuncture technique, “Xin Nao Kai Qiao”, which has been used as a standardized treatment for Stroke across China. In 2008, she successfully completed her PhD dissertation regarding “Lumbar Intervertebral Disc Protrusion”.

Tuesday and Thursday: 9am to 8pm 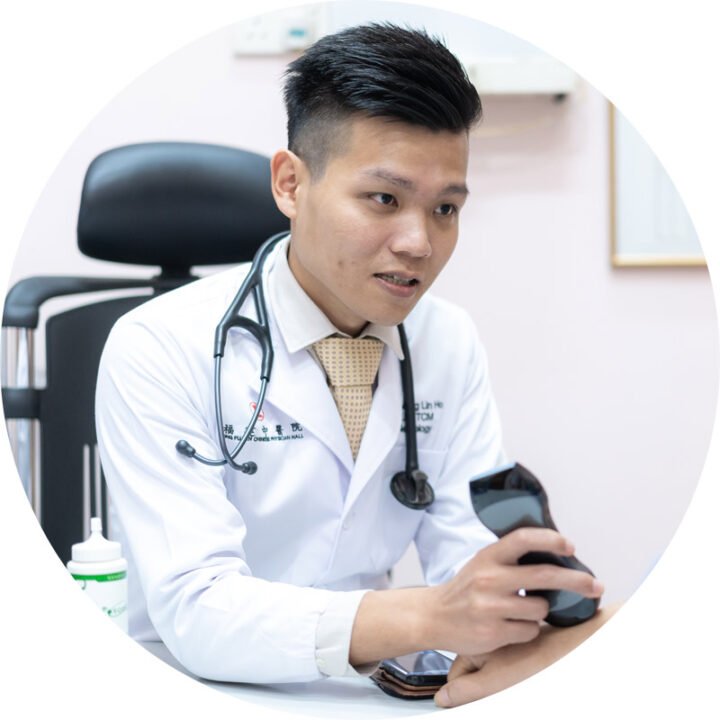 Dr. Wong was trained in Western Medicine, achieving First Class Honours, and a top rank in his cohort and was appointed “College Scholar”. He was subsequently trained in public hospitals and was also attached to world renowned hospitals in Tokyo (Keio University Hospital) and Hong Kong (Queen Mary hospital). Dr. Wong subsequently developed a special interest in Traditional Chinese Medicine and was awarded scholarship by Guangzhou University as a result of his academic excellence. He also furthered his interest in neurodegenerative diseases by undertaking a Masters of Neuroscience and Neurodegeneration at the University of Sheffield to combine both TCM and medical management of neurodegenerative diseases. Till date, he is one of the three medical doctors in Singapore who also took up a Bachelor of TCM.

Dr. Wong published multiple research papers in international journals for both Western Medical and Traditional Chinese Medicine. He also participated in an international conference in Lisbon held by European Society of Cardiology (ESC), EuroPrevent on hypertension.

Given his knowledge in both Western and TCM, he has developed a new technique for neurological disorders, known as “LH NeuroAcu Technique™” where the connections between the brain and individual acupoints are identified. Using the technique, he has treated multiple patients with neurological conditions such as patients with Stroke, Multiple sclerosis, Cauda Equina Syndrome and Guillain Barre Syndrome. Through his understanding of both Western and Chinese medicine, he developed a new TCM formula for the management of Asthma and COPD and successfully withdrawn patients off their inhalers. He also participates in the teaching of both Western medical and TCM students.

As an additional interest, he combined his anatomical knowledge together with the use of neuroacupuncture for the management of urological disorders such as (erectile dysfunction, premature ejaculation and non bacteria prostatitis) and devised a “6 point neuroacupuncture”. He has successfully assisted many males in regaining their sexual function. 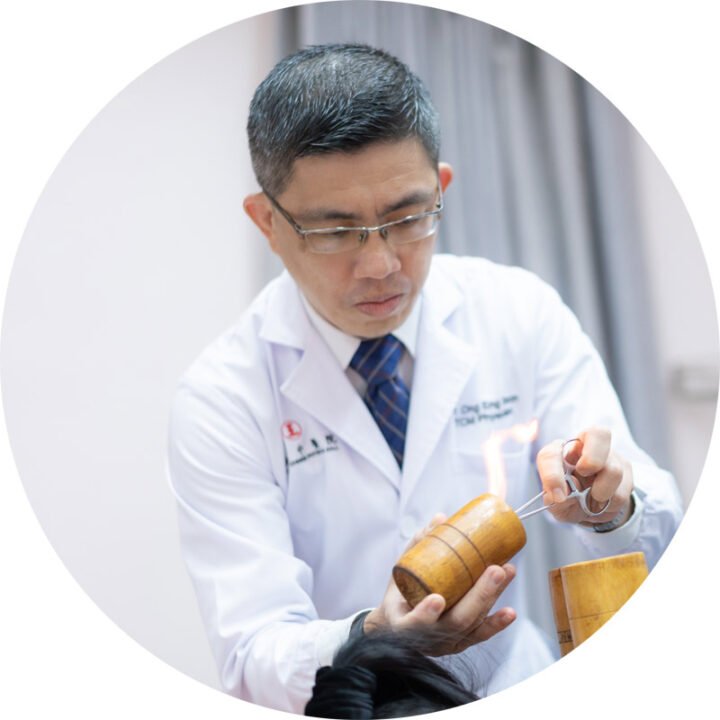 Physician Ong studied at the Institute of Traditional Chinese Medical studies in Singapore from 2000 to 2006. In 2006, he graduated and passed the TCM practitioner examination by the Ministry of Health with flying colours. Since then, he has been working at Ong Fujian Chinese Physician Hall. Under the mentorship of Prof Wong Pang Ong, Mr. Ong Eng Soon rapidly built up his experience and skills for the management of patients with Orthopaedics disorders e.g fractures and dislocations.

Monday, Wednesday and Friday: 9am to 8pm

Tuesday and Thursday: 2pm to 8pm